Posted at 09:59h in Uncategorised by mxm@dmin 0 Comments
5 Likes
Share 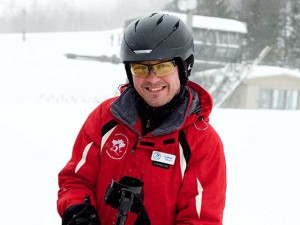 In 1992, Nirvana and Pearl Jam were blasting on the radio, A Few Good Men were trying to handle the truth in theatres, and 10 year-old Gabor Takacs was hitting the slopes for the first time. Fast forward to today, and Gabor is now the Program Director for CADS at the Mansfield Ski Club.

Gabor’s adaptive skiing experience started with various Track 3 programs as a student, and later as a volunteer. Around 2002 he tapped into Google to look for adaptive ski programs in the GTA; he found the CADS program at Mansfield Ski Club, the Adult Disabled Downhill Ski (ADDS) Club, and has been part of ADDS ever since.

Unlike what was available to him in ’92, Gabor currently uses lightweight aluminum outriggers and normally skies on bright orange Elan skis as he 4-tracks from top to bottom. Gabor’s goal is to have the community at large embrace adaptive skiing as merely another way to get down the mountain and he works to grow both the student and volunteer opportunities at ADDS.

Be patient. Be persistent. But most importantly, have fun!

Gabor often reminds his students that Rome wasn’t built in a day and that they should take one technique or methodology at a time and apply or adapt it to the best of their ability.

When asked about CADS volunteers, Gabor quickly expressed his appreciation for them and commended all CADS volunteers for supporting an awesome organization and cause. He sees CADS volunteers as the lifeblood that makes the CADS mission possible.

What’s All the Fuss about Festival?

Sun Peaks was the site of the 2008 CADS National Festival and Gabor’s first Festival experience. He was eager to ski at a ‘real’ mountain outside of eastern Canada, and equally eager to meet other ski enthusiasts from across the Country.

Gabor sees Festival as an opportunity to meet fellow adaptive skiers and instructors, and work on new levels of progression. He recognizes the potential for becoming complacent with progression and technique after many years of skiing, and Festival gives participants a push to remember that skiing is a continuum that can be built upon regardless of skill or level of ability. It was tough for Gabor to choose just one favourite memory from a past Festival, but he finally settled on the annual snow bocce tournament. Where else but at Festival can you take a classic summertime game and play it in the snow?!